The following lists will help you evaluate your own, your relatives’, or your acquaintances’ marriage or relationship. 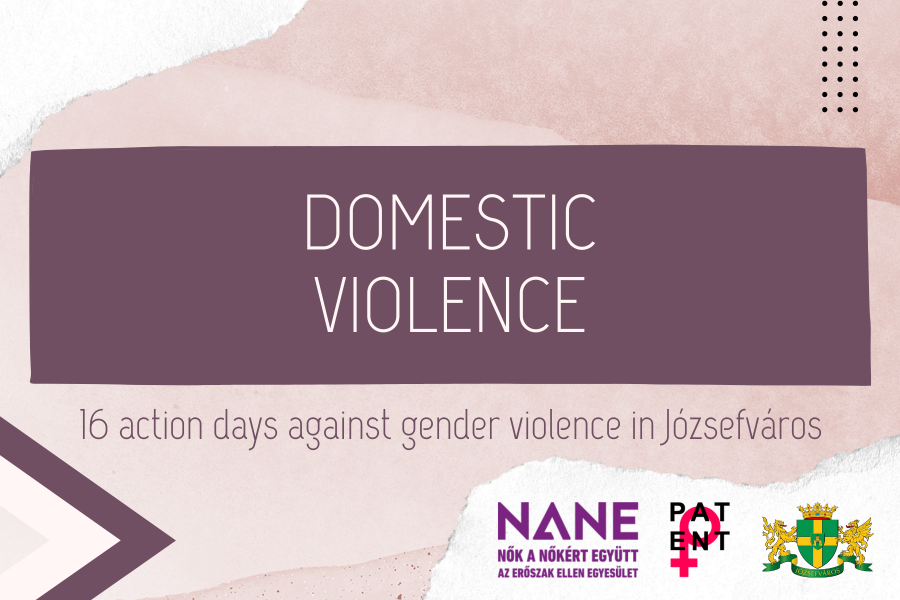 According to a 2014 study, published by the European Union Agency for Fundamental Rights, which was conducted on a representative sample, more than one million women in Hungary have suffered physical or sexual violence from their partners. Children living with the abused persons are also victims. Despite the frequency and seriousness of domestic violence cases, it is usually surrounded by silence and denial. Outsiders tend to blame the victims, thus sustaining and strengthening the violence. Attention should be directed to the prosecution of the abuser, since violence is manifested through a series of criminal acts. Domestic violence is not a private matter. If you or your children are abused, you have the right to get help and protection.

The misbeliefs and misconceptions surrounding the abuser and the victim are the results of the failure of intervention and prevention. Victims tend not to get proper support - neither from those around them, nor from the appropriate institutions. The following lists will help you evaluate your own, your relatives’, or your acquaintances’ marriage or relationship. Should these lists raise further questions, feel free to call NANE’s Helpline.

Why do women stay in abusive relationships?

If you feel like you or your acquaintance could say the following sentences, it may be indicative of an abusive relationship:

The presumed interest of the children: “The children need a father. A violent father is better than no father at all.”

Marital oath: “I said I was going to stay his wife till death do us part. I’ve got to accept his bad side too.”

Love: “I love him. When he’s not being aggressive, I’m happy. If I stay with him, love may change him.”

Denial of reality, or comparing it to even worse scenarios: “It’s not actually violent what he’s doing. I can live with it. There are people in much worse situations.”

Shame: “It’s just better if no one knows about this.”

Remorse: “It must be my fault. I’m doing something wrong. I deserve the way he treats me.”

Ruined self-esteem: “I wouldn’t find anyone better than him anyway. He tells me I’m ugly, and on top of that I’m a bad mother and wife.”

Fear: “He threatened that if I leave him, he’ll come after me and kill me, and my children.”

Learnt incapacity: “I wouldn’t be able to change the circumstances anyway. He’s stronger than me. Nobody can help me.”

False sense of responsibility (social pressure): “Families needs to stick together. It is the woman’s duty to keep it intact.”

Financial dependence: “I wouldn’t be able to support myself and the children. Anyway: where could I go?”

Emotional blackmail: “He told me he couldn’t live without me. That he would commit suicide if I left him.”

Domestic violence appears in all shapes and forms. In the following list we have collected the most typical examples:

Verbal abuse: The abuser underrates and insults his partner, ridicules her (her looks, religion, ethnic origins, etc.). He uses threats (of harming her family, setting the house on fire, taking the children away, committing suicide).

Emotional abuse: The abuser denies fundamental things from his partner. He shuts her out from his thoughts or emotions, yet keeps her under control; acts utterly jealous; ruins her self-confidence; and questions or ignores her independent decisions. He keeps blaming his partner for everything, including his own emotional outbursts. He questions his partner’s emotions and/or experiences (including the severity of the abuse). He denies talking about the issues, or even denies their mere existence. He behaves threateningly: destroys things, damages his partner’s property, terrorizes her with weapons, uses a threatening tone or look, offensively questions her or drives dangerously. He stalks former partners with the excuse of visiting rights.

Physical abuse: He pushes, hits, slaps and/or chokes her, pulls her hair, slams her, kicks, bites, shakes, burns, threatens or hurts her with weapons. He denies even her most fundamental rights: freedom of mobility, the ability to have any independence. He locks her in, or out, ties her to something, causes her to starve or become parched. He doesn’t let her wash herself, or hides her medication (or the money with which to buy it).

Sexual abuse: He forces her to partake in sexual activities that she doesn’t want, hurts or humiliates her during sex, rapes her, injures her genitals or forces her to have intercourse with others. He prevents her from taking contraceptives, forces her to have, or not have, an abortion.

Social and economic abuse: He isolates her from human and financial resources; prevents her from having a job, or making money – or if she does, he takes it and rules over it. He threatens her with their commonly owned companies, or blackmails her over loans taken in her name. He questions every financial decision she makes, yet he accepts no criticism. Isolation affects everything: what she can or can’t do, whom she can meet, whom she can talk to, where she can go, what she can wear. He prevents her from making new friends, talking to her family, getting a job or keeping money with her. He locks away the phone, reads her mail, searches her pockets and bags, escorts her everywhere, and keeps her under full-time surveillance at work, or at school.

This list is not even remotely complete. Having read it, we’d like to draw attention to a common misconception, e.g.: “True, men might give a slap or two, but women keep their partners in emotional terror”. This argument almost always comes up regarding the topic of domestic violence. In reality, physical abuse almost always bears severe emotional consequences. Besides, those who use physical violence tend to use many forms of emotional and verbal abuse. The inequality of power doesn’t even give the possibility of returning the abuse, as the victim is not in the position to give pay back; rather, she simply tries to protect her children and herself. In abusive relationships, one of the parties (out of which 95% are women) is vulnerable and defenseless; the other is not.

Take it as a warning sign if your partner…

- keeps underrating you, tends to be constantly grumpy, humiliates you in front of others;

- tries to make you believe that you are ignorant, worthless or crazy;

- doesn’t let you go out without him, or even to keep in touch with friends and family;

- breaks objects or throws them at you when angry;

- doesn’t let you keep money with you, or get a job;

- keeps blaming you (or others) for his own problems;

- has a record of violent relationships.

- are in fear from your partner’s anger or jealousy;

- are not able to see your friends or family because your partner disapproves of your relationship, or says that you only need each other;

- often base your decision on where to go/what to do, based on your partners presumed reaction;

- consume alcohol/drugs just to escape from the pain and reality of your relationship;

Any of the signs listed here alone may very well be a secondary source to identify domestic violence. Should you experience any of these with an acquaintance, relative, patient, etc., you can help them by gently driving the conversation to the topic, giving themthis pamphlet, or leaving it at a visible place. If the circumstances seem right, you might ask them if they are abused at home.

Frequent wounds and/or injuries which are hard to explain. Sometimes a series of miscarriages as a result of the abuser hitting or kicking the stomach. Physical abuse tends to start during pregnancy.

Frequent visits to the family doctor or hospitals with hardly explicable complaints or a strong sense of fear, without any visible signs of injury. Being assigned to the psychiatric ward for panic attacks, depression, suicide attempts, PTSD.

Isolation of the victim – from money, phone, car or other means of transportation, friends, family, work opportunities work, or study.

The affected person often talks about her partner’s anger and temper.

The affected person is scared to contact any official authority out of fear of her partner’s revenge. In some cases she wants to protect the abuser from the authorities.

The victim is scared to talk in the presence of her partner, or to oppose him.

The affected person often tries to run away from home.

Development of addiction to drugs or alcohol as well as a growing number of suicide attempts.

The abuser insults the children both mentally, physically and/ or sexually.

The abuser acts jealous, accuses the victim of having sexual relations with others.

The abuser tries or threatens to force his partner into psychiatric care. By doing so, he’s trying to convince you that she is mentally ill.

The abuser humiliates his partner in front of others. It is also common that he shows a calm, respectable face in public, but when no witnesses are around, becomes aggressive. Thus if someone is complaining about her partner abusing her, when you find that particular person a genuinely nice person, don’t presume that the victim is exaggerating. This kind of bipolar behavior is common amongst abusers.

It is highly important that the victims of domestic violence know their rights and options. If you suspect you know someone who lives in an abusive relationship, call NANE’s helpline for support.

This article is based on the flyer published in 2016 with the help of NGO Fund of the EEA/Norway Grants. The flyer can be freely photocopied and distributed in its entirety.