How will the opening of the street be tested? When will it be possible to send feedback? Will Bacsó utca become a „Party street”? How will the noise pollution change? How much more difficult will it be to park? Why not use the space in front of the market? 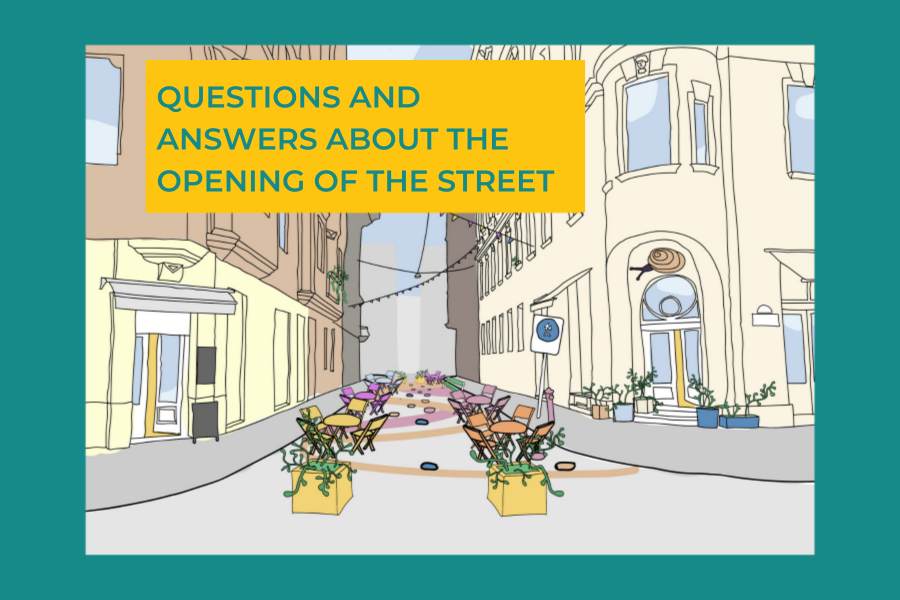 As we have informed you earlier, on June 18, 2021 the Józsefváros Municipality temporarily opened the section of Bacsó Béla utca between Vásár utca and Bérkocsis utca for local residents and businesses. The opening of the street means its closure for vehicular traffic and the designation of a pedestrian and cycling zone.

The street is planned to be open from June 18 until October 3, 2021. If this experience proves to be successful and is supported by residents, then Bacsó Béla utca will be open to residents on a temporary basis in the future as well.

How will the opening of the street be tested? When will it be possible to send feedback?

On the week before the opening, the coordinators of the project (staff members of Rév8 Zrt. and municipal staff) visited the residents of the buildings next to the designated section of the street in person to inform them about the opening of the street and about its operation and schedule. Most of the residents we contacted supported the initiative, so we will keep this in mind as we continue to organize this experiment.

The first event on the freshly opened street will be on June 18, 2021 with the Gate Opening Picnic program series of the municipality, where Rákóczi tér will be one of the locations for the RákócziSokk concert.

We will be continuously monitoring feedback and comments from residents, which you can send to info@rev8.hu.

The restaurants in the street can stay open until 10 pm according to the current public land use policy.

After this, a public consultation period will continue in September, 2021. This time period will allow us to collect feedback online and in person. The Ownership, Property Management and Public Land Use Committee (Tulajdonosi, Vagyongazdálkodási és Közterület-hasznosítási Bizottság) of the Municipality will make its decision about whether the street should be opened next summer or it should be turned into a permanently pedestrian area based on the results of the consultation. At the same time, these experiences may make it possible to make this section of the street a one-way street. The lessons of this process can also be used for the opening of other streets in the rest of the district. The medium-term objective of the Municipality is that open streets should be initiated by residents and businesses in the district on normative terms.

The objective of the Municipality is not to create a “party street”, but to create a peaceful space that can be enjoyed by people visiting restaurants, local residents wishing to relax or organize various programs and cultural events.

That is why half of the area will be designated as an area not for consumption. It is important for us that the same quality of public space should be enjoyed by those who are not the clients of any of the restaurants and that in exchange for the use of public space, restaurants should also provide public services for everyone. That’s why we would like to introduce non-consumption terraces, which will be maintained by restaurants, but are not part of the restaurant’s consumption area, so they can be used independently of them as well. Moreover, we support that they sustain plants and organise various programs for the community in exchange for the public space they will be using. The Municipality will also place plant boxes on the street during this testing period. The Rév8 Zrt. and the Municipality will organise programs here in summer. For example, some of the community programs related to the renovation of Déri Miksa utca will take place on this street section, too.

How will noise pollution change?

The noise pollution generated by vehicles will become substantially less. We also intend to keep noise originating from other sources as low as possible. The restaurants can stay open until 10 pm, which may change to an earlier time if it becomes a problem based on the feedback from residents. Signs will be placed to draw the attention of guests to enjoying the open street quietly. The planned programs will also be quiet such as a flea market or asphalt drawings. In the district, music and loud TV watching are prohibited on street terraces – so even if a similar program be organised, the Municipality will have to give special permission and the peace of mind of residents will be an important consideration. Public Space Supervisors will constantly monitor compliance with these rules.

How much more difficult will it be to park after the opening of the street?

Five regular parking spots will be temporarily removed on Bacsó Béla utca. We will inform motorists about the shortest detours with signs posted on site. Those heading to Bérkocsis utca can make a detour on Víg utca, while those heading to Vásár utca can drive through Gutenberg utca. The lessons of the testing period may make it possible to make this section of Bacsó Béla utca a one-way street, which could increase the number of parking spots after the open street period.

Why not use the space in front of the market?

The space in front of the market does not belong to the local Municipality but to the Local Government of Budapest. Of course, it would be great to use this area for community purposes as well. If the testing period causes residents too many problems, relocation can be a solution, which will be discussed with the relevant actors after the outcome of the testing period.

As there are several difficulties to be expected in front of the market hall, we chose Bacsó Béla utca as the location of the current test. The space in front of the hall on Rákóczi tér is part of the fire escape route and subway service area. Moreover there is no shade on the square and as the area is owned by the municipality of the capital (and not the district), even temporary changes or major modifications must involve a long consultation with more actors.

For further information about the opening of the street please contact Rév8 Zrt: info@rev8.hu or https://www.facebook.com/rev8zrt