Concerts, exhibitions and gastronomy at several locations from October 1 to October 3 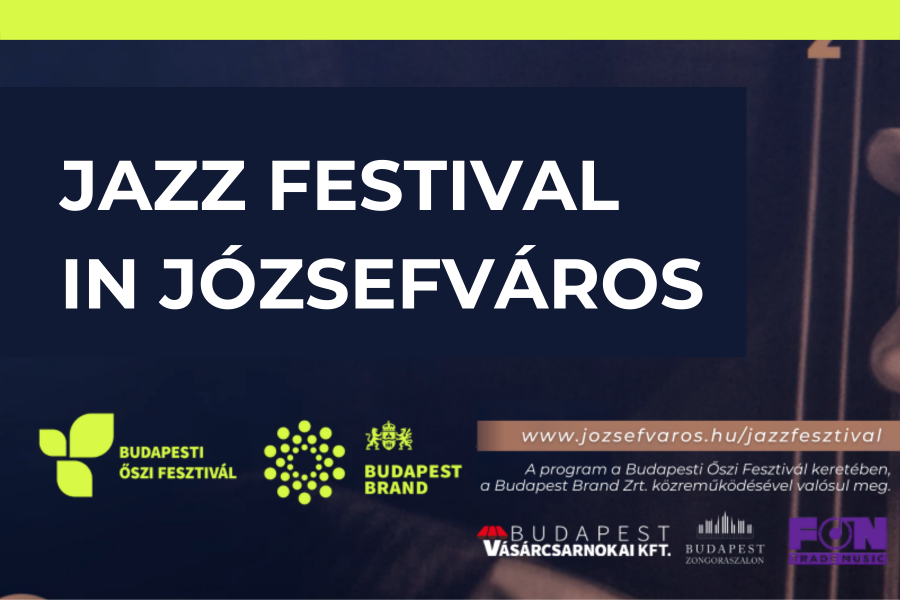 Józsefváros is repaying an old debt.

Many jazz musicians of world fame were born, lived or are living in Józsefváros who started their career here and have been popularizing Hungarian culture through jazz. Whole generations of musicians have grown up in the district, it is almost a stock phrase that Józsefváros is the district of Gypsy musicians. Jazz life which also took off in Hungary in the seventies became increasingly popular in the cultural life of the district as the first jazz clubs opened in the eighties. The blend of various cultures, nationalities, languages and traditions is a relevant element not only of the 8th district but also of Budapest, the entire country and our life in Central Europe. This colorful cavalcade gives a particular taste and feeling to our everyday life and our festivals. Jazz is a typical form of expression of everything, melting differences into a harmony but also preserving unique tastes and, like all kinds of music, creating a community. We have a great need for community, harmony, shared experience and the experience of infinity through music.

The Municipality of the 8th district is trying to promote this unity through music when it organizes the first Jazz Festival in Józsefváros between October 1, 2021 and October 3, 2021.

Rákóczi tér and the Csarnok, as iconic venues, are hosting the three-day event. The program includes almost all styles of jazz, from the best-known, world-famous formations to start-ups, solos, duos, and trios. Free entry.

We are organizing our summer-farewell festival with the purpose of creating tradition; we would like to invoke the incomparable, unique atmosphere of Józsefváros with the help of jazz every autumn.

As a passionate admirer of Józsefváros, painter Norbert Oláh has been searching the typical atmosphere, stories of the district in many of his works. His latest paintings also delineate such places, the houses at Víg utca 20. and 22.

The former housed the Omnia garage and eight sisters of a Jewish family also lived here; while the latter was the home of Aladár Pege, the legendary jazz double bass player, as commemorated by a plaque.

140th anniversary of the birth of Károly Bura, the Gypsy violinist and band leader who became famous between the two World Wars, will be celebrated in October. The Art Gallery of the Roma Parliament Association has its headquarters in the house where Károly Bura lived, who, in his last will, expressed his wish that his home be converted into a Gypsy museum after his death (1934).

Károly Bura’s wish was forgotten for almost nine decades, but it is coming true now. Paying respect to the excellent musician and interest representative, the Roma Parliament Association has named the exhibition site rented from the Municipality ‘Bura Károly Gallery’. Although the opening ceremony of the Gallery was originally scheduled for October 21 (the artist’s 140th birthday), we have brought it forward for the period of the Budapest Autumn Festival so that both events receive more attention. A photo exhibition on Gypsy musicians opening on Saturday, October 2 at 6pm is also prepared for the naming ceremony. Lajos Sárközi and his band, one of the most outstanding representatives of contemporary Ggypsy music are playing at the opening ceremony. Lajos Sárközi - violin, Rudolf Sárközi - double bass, Gyula Csík – cimbalom

The Roma Parliament together with Fülemüle restaurant at Kőfaragó u. 5 are joining the Budapest Autumn Festival with a unique program. After the opening ceremony of the exhibition and the Bura Károly Gallery, you are invited to celebrate in the street and at the restaurant with the program ‘Szól a fülemüle és Szól a kakas már’. From 7:30pm, the Sárközi band and László Dés saxophone artist are performing a musical dialogue in the street closing it with a concert inside the restaurant. Jewish and Gypsy food specialties make the incomparable musical event even more special. (For reservation, please call: 06 70 305 3000)

The Gallery and the restaurant will be open until midnight on this day.

This program is part of the  Budapesti Őszi Fesztivál in liaison with Budapest Brand Zrt.